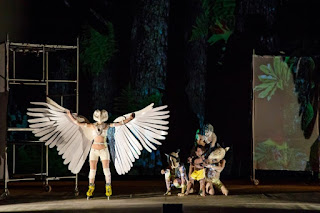 Macunaima Gourmet is a large puppet show - the cast is large; the stage is large; the puppets are large, complex and beautiful. It comes from the company Pigmaliao escultura que mexe (Brasil). It’s poetic and political, using both puppets and human actors. This is puppet as cultural symbol.

The puppets are varied. Some are marionettes. One actor has a puppet of a man tied in front of him; another has a puppet in front of him from the waist up; the human-sized free-standing puppets is sometimes manipulated by multiple puppeteers. There are eight or nine in the cast.

The story is based on Mário de Andrade’s 1928 novel Macunaima, and I think that it expands its story to suit the play’s theme of exploitation. The title character is a native, born “the hero of the people”, and he’s found in Brazilian myths. In Macunaima Gourmet he’s played by a large brownish puppet who’s fattened up and sold as canned meat. He’s ultimately fed to an obese puppet whose features resemble Jair Bolsonaro. But nature triumphs: the fat puppet dies from overeating and the ants, the symbol of transcendent nature, carry him off.

It’s opening is stunning: we hear the sounds of the rain forest - rain, chirping - and the forest is bustling with people and creatures, particularly ants. One actress wears a costume with one breast - it’s a reference to the etymology of the word “Amazon”, meaning “without breast”. She is Mother Amazon herself. And there’s a beautiful white bird - an actor on roller skates - that Macunaima rides on (and that later has his wings clipped). The peace of the forest is violated by a fellow on a motorbike delivering food - “Gourmand Eats”.

The symbolism isn’t simplistic; the animals aren’t uniformly benign. There’s plenty of fuel for analysis here. The actors don’t speak much, and when they do they speak a few languages and a muffled gibberish that’s the puppetry equivalent of vocalese.

There’s a large video screen on the back wall of the stage thats serves multiple functions. Sometimes it shows us the forest ants, reflecting the stage. Later it politicizes the fable with scenes of mobs and violence. At the end, we’re presented at the end with a list of exploiting parties, including the  Catholic Church, USA and Donald Trump. Finally the cast unrolls a banner saying “Lula Livre”.
Macunaima Gourmet is superb, exemplary work using puppetry’s unique political voice. Viva para Pigmaliao escultura que mexe! 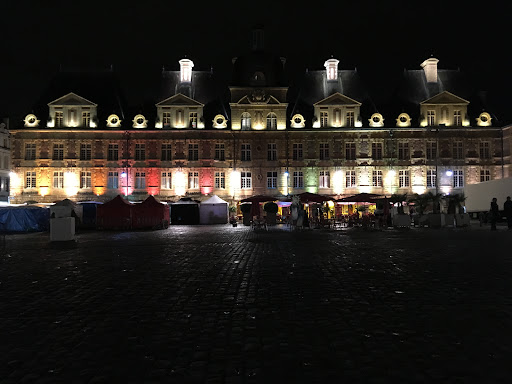