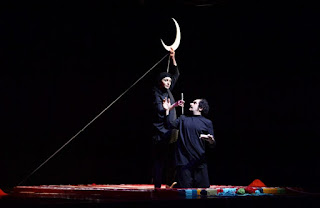 La poussiere et la couronne (Dust and the Crown) is paper theater, presented by the company Yase Tama and its writer/director Zahara Sabri. Its paper puppets are animated by two puppeteers dressed in black (Saeed Abbak and Fahimeh Barotchi) seen against the endless, backless black of the stage. An actor voices the recorded text. The paper puppets - full figures, profiles, crowns - are connected to a grid of elastic bands on the floor, and this grid itself becomes a sort of puppet when the puppeteers raise it at the end. It’s all meticulously lit.

The story concerns ambition, murder and power, and there are many references to Hamlet and Macbeth. I missed a lot of the French, but there’s no mistaking the recurrent phrase, spoken with grief and resignation: “Je suis mort”. What’s more, there’s no mistaking the Shakespearean allusions. How could anyone mistake Ophelia or the Hamlet’s poison cup? Sometimes the puppeteers become the characters, speaking themselves
The stage picture is eerie and expressionist, and the entire effect of Dust and the Crown is one of sad, world-weary resignation, enhanced by the delicacy of the puppets. Great, creative work!