In Buddhist-Taoist mythology, a soul is reborn only after meeting Old Lady Meng and drinking from her cup of forgetfulness. In this play, a woman is reincarnated three times without finding happiness.

The show begins with fingers as shadow puppets, and the sort of classical Chinese music that’s like the sound of nature. But mostly the puppets are small, delicate hand puppets elaborately dressed. The puppeteers dress them on stage with ritualistic, meticulous care. What’s more, there’s intermittent singing throughout. We can see that this is a ceremony.

At one point, a puppeteer tosses a hand puppet and another catches it just by just placing his hand under the mitt as it falls.
Some scenes are spooky, heavy with shadow, and the play ends with Old Lady Meng telling the woman that if she cries, she’ll forget her life. What a mournful thought! Let no one say puppetry is just for children. This production is mystical and profound. Wonderful!

Famous Puppet Death Scenes Old Trout Puppet Workshop (Canada) treats us to a mostly wordless piece called Famous Puppet Death Scenes . It consists of perhaps 16 short, unrelated vignettes in a puppet proscenium, each about two minutes long and each depicting the oh-so-tragic death of a puppet. E.g.: - In a recurrent motif, a poor fellow at the opera is repeatedly pummeled by a huge fist, as much as he tries to avoid it;   - An innocent boy is lured into a villain’s home by a lollipop - and eats the evil old man; - Puppets (puppets of what?) on a German game show have to choose the Ja door or Nein door - and either way, the ogre eats them;  - In a crowning jewel, an old woman returns home to find her husband’s suicide, so she shoot her self; her son comes home and sees what's happened and then shoots himself; his son comes home and does the same; the old husband comes home and we see that it's all been a trick; the old lady comes to life and sees her livi
Read more 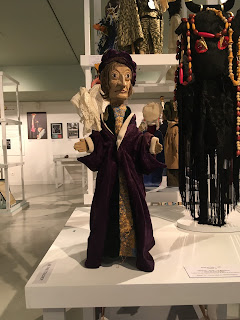