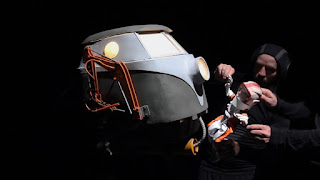 Intranauts comes from Green Ginger (UK) directed by Emma Williams. In this play, woman travels in a large, complex vehicle - a micro-vehicle - inside a man’s body, attending to maintenance. She has her own work load, but he can make requests.

We meet the gentleman in a smoking jacket at the opening, with “Hello”, as he addresses his computer screen, which is a scrim. He speaks an upper class dialect throughout. Then we meet the young lady in charge of his care, who speaks with decidedly lower class diction. She’s a whiz, though, and when an arm comes off she goes into a sort of inter-body space walk to care for it (the puppeteers are handling the vehicle and its appendages). On the way, she bumps into a blood cell and, I think, a virus, but she succeeds.

The central event in the piece is an unexpected malfunction of the vehicle that signals its host’s demise in a-certain-number-of minutes. We watch the electronic display count down as she punches in the code - 7432. He requests that she travel to his brain to see if she can improve his mood - “I feel sad” - and after trying to put it off, she complies. But can she can avert the catastrophe?
Intranauts is great fun, but it’s dated - reference Fantastic Voyage and 2001 - and the actors don’t make much of their roles. The real problem is dramaturgical: there’s no precipitant, no reason that the system should break down today. For this reason the play doesn’t mean anything, and it’s just - well - fun.