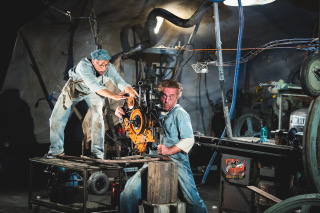 Garage is a wordless play from Cirka Teater (Norway) directed by Espen Dekko, produced on a formidable set by Gilles Berger. It calls itself “objects theatre”, and the two mechanics we find tinkering in their garage are indeed joined on stage by a crowd of objects large and small, electrical and automatic: pulleys, levers, wheels, cogs, dolls, a rubber chicken… They’re all put industriously to work, one action triggering the next.

The workmen have a chicken, and they savor its one egg with relish. Then the chicken lays a second egg, unexpectedly, which the pair eat as well. This second meal, however, puts them in an over-energized state, and they excite their inorganic mechanism so much that it breaks down, literally blowing a fuse.

Garage is fascinating to watch, a cornucopia for sight, complex and kinetic. But without program notes the circumstances of the wordless play - the circumstances surrounding the eggs - would be unclear. Still, we wouldn’t care much - we’re having such a good time watching these two.

The extended metaphor is fascinating. The machine isn’t threatening, as in Chaplin’s Modern Times. Objects don’t overwhelm people in this garage. Men are in control, but they don’t recognize the potential of mechanics. How they rejuvenate the garage after the blow-out is unclear - but we see nonetheless that it’s life-affirming and redemptive.

Garage stresses objects, but what animates it is the superb moment-to-moment life of the actors. The characters’ unspoken experience is perfectly clear because the actors (Gilles Berger and Paal Viken Bakke) have analyzed the play so meticulously. What’s more, their expressive flow of emotion highlights the lifeless constancy of the mechanism looming about them. Bravo for Cirka Teater!